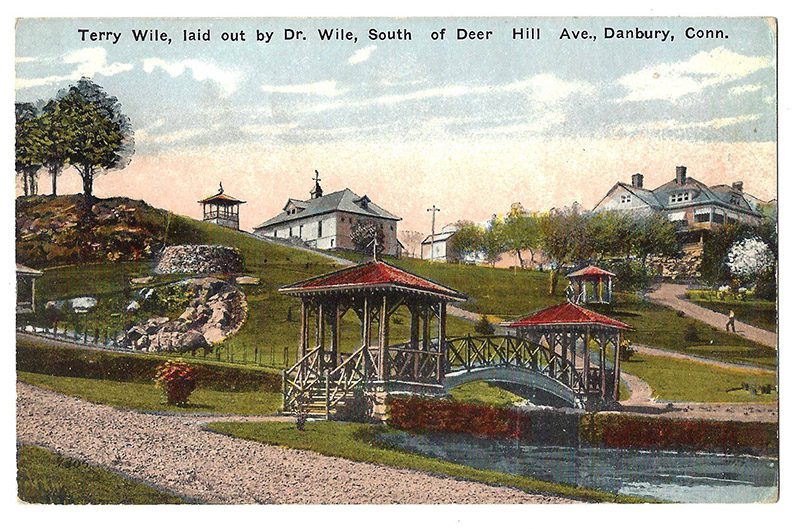 For some time Dr. W. C. Wile has had a gang of men at work making a novel addition to the grounds about his beautiful home, Tarrywile. The innovation is a Japanese garden and it is nearly completed now. It lies west of the large lawn in the front of the house and, when completed, will be a continuation of the lawn.

The idea is a novelty in this city and it is as attractive as it is novel. The ground, which was formerly rough and covered with a wild growth of grass, weeds and bushes, has been reclaimed and now bears the appearance of a smooth lawn.

Not far from the road two tiny ponds have been arranged, the water flowing into them from a large spring in the rear of the house. One of these ponds is several feet higher than the other and between them is a rustic bridge of natural cedar boughs. About the garden are several small rustic houses made of the same material as that in the bridge. The one nearest Dr. Wile’s house is on much higher ground than the others and has been named “The Punch Bowl” after a noted eminence near Honolulu which was visited by Dr. Wile and his family while in Hawaii last winter.

Running about the garden are a number of paths and drives, the latter being more for ornamental effect than for utility. The effect of the entire garden is artificial, as it is intended to be. Back of this there is a good sized knoll on the ease of which is a bluff of rocks and it is the intention of the owner to beautify this, at the same time leaving the effect as natural as possible.

The rocky bluff is now covered with small trees and an undergrowth of bushes and weeds. The bushes will be taken out and in their place will be planted a profuse of growth of laurel, trailing arbutus, wild lilies and other wild flowers. Many large rocks about the knoll and east of the house have been bared by laborers and will be covered with moss and growing vines.

In the rear of the house men are aw work on a peristyle which Dr. Wile will have built. This will consist of a double line of white pillars in Italian style of architecture and numbering altogether forty-eight. At each end will be a large statue and the whole will be covered with vines.

When these improvements are completed it will be possible to step from the veranda on the west side of the residence, walk up the wide flight of a few steps, follow the grassy path to the end of the peristyle and through this to the knoll which is nearest the rustic house. From this the path will lead by devious ways about the garden, passing all the summer houses and crossing the bridge over the little ponds. The effect of the whole thing is handsome, artistic and novel. The garden will be particularly pretty when lit up at night as it is intended it shall be whenever desired.

Unique among the season’s social events in this city and surpassing in novelty and elaborateness any of the others will be a reception that Dr. and Mrs. W. C. Wile will give this evening in the Japanese gardens at their suburban home, Tarrywile.

Landscape gardeners have been at work for months transforming acres of rough hillside into one of the most charming gardens imaginable. Rocky hillsides have been converted into green slopes and rough meadows into graceful stretches of lawn through which paths wind among trees and shrubbery to rustic summer houses and cosy loitering places on slight eminences and shady nooks. Miniature lakes fed by a natural spring whose waters gush from the hillside give the finishing touches to a place of rare charm.

Dr. and Mrs. Wile will receive the guests in a tent upon the lawn just south of the house. They will be assisted by Miss Alice Wile and William Roach of Boston who is their guest. From the reception tent, guests will pass to the peristyle which forms the approach to the entrance to the gardens.

The peristyle is complete except for nature’s work in growing the vines which, in another season, will enclose and canopy it completely. The columns of the peristyle are white and between them are reproductions of Italian statuary in plaster Paris upon marble pedestals and casts of vases of Italian modeling. Beyond the peristyle on the summit of the hill overlooking the gardens is a tall flag staff from which the national colors will float. The Danbury band will be stationed beneath the flag while the reception is in progress.

Then by winding paths the guests may stroll from point to point as fancy may dictate, finding some new pleasure in unexpected places. The paths will lead first to the rustic summerhouse on the summit of a slightly knoll overlooking the gardens below, where ice cream will be served. Further along flavors of flowers will be dispensed in a summerhouse elaborately adorned with blossoms and leaves. Still farther on the punch will be served in another rustic bower.

Hawaii has a prominent place in the nomenclature of the gardens. A bridge thrown across the miniature lake is called “Heialua” being named after a bridge in Hawaii from which it was designed. Dr. Wile was attracted by the beauty of the bridge while traveling in Hawaii and caused photographs to be made of it, from which the bridge at Tarrywile was fashioned. A summerhouse near the grassy shore of the lakes is name “Wikeke” after a famous Hawaiian watering place not far from Honolulu. One of the summer houses appropriately situated on high ground is named the Punch Bowl after an old volcano crater back of Honolulu.

The porch decorations will be large Japanese globes brought from Honolulu.

The flowers will be distributed by the Missus Natalie and Margaret Rogers who will be chaperoned by Miss Edith Nerrick and Mrs. H. F. Brownlee, Misses Mayme Sue Brown and Marie Rogers will serve in the Japanese tea house.

It is doubtful if there is any other country place in Connecticut possessing such delightful environment, both natural and designed, as Tarrywile and its beauty will increase year by year as the trees and shrubbery, many of which have just been set out, grow into the forest which will eventually surround the place.